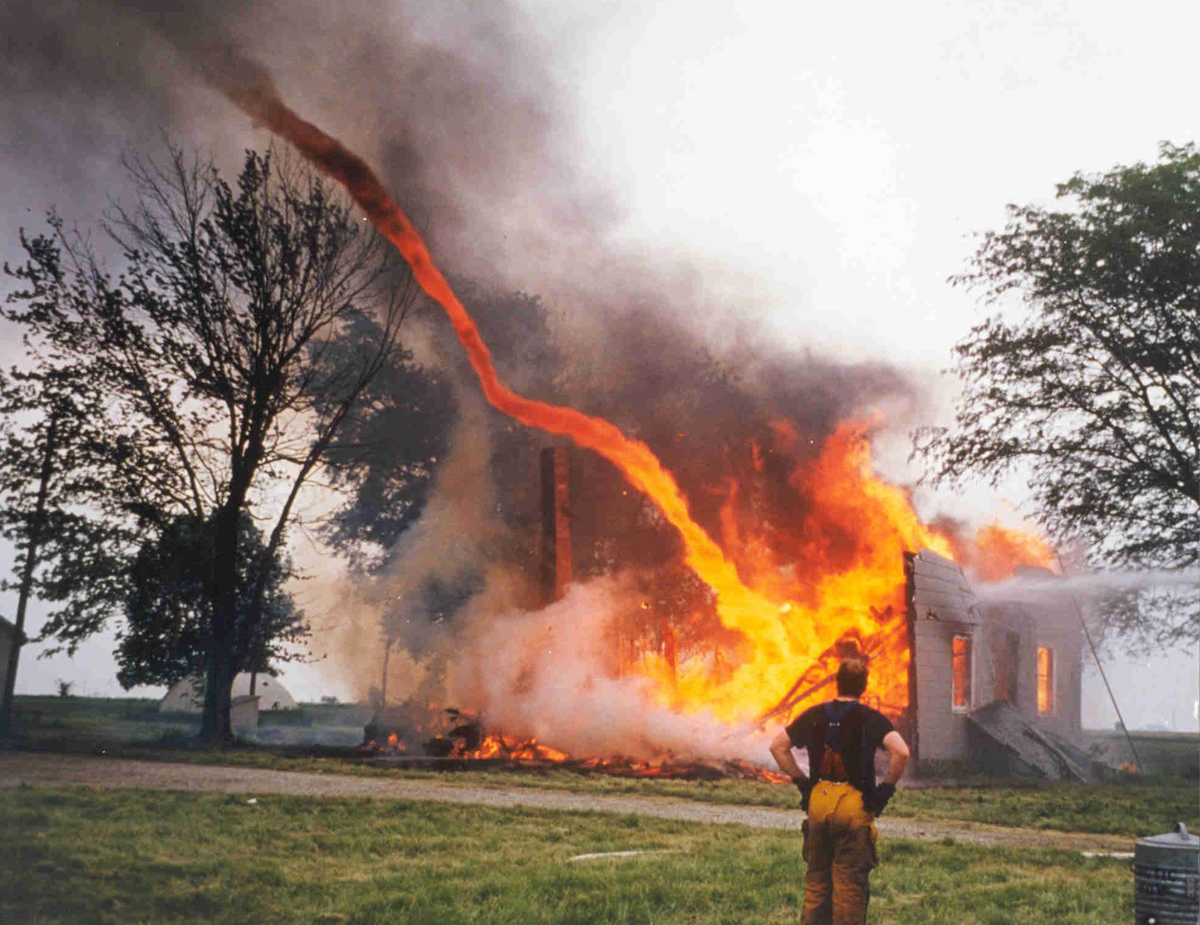 You might want to check your 2020 disaster Bingo card. If you had fire-tornado or "firenado," you're a winner -- unless you happen to live in certain sections of California. If you don't have a fire-tornado on your card or haven't ever heard of one before, you're in good company.

A "fire tornado" is sometimes more commonly referred to as a firenado, firewhirl, fire swirl, fire twister, fire devil, or cyclone fire, but they are not the same. Australian cinematographer Chris Tangey, working in the outback, has documented fire tornados in that country, where large, dry areas, dust devils, and hot air weather conditions make them more prevalent. Still, they're not as uncommon here as you might think, just rarely documented.

Fire Tornados in the United States
Fire tornados are a new kind of fire behavior. They are the result of intense heat combined with whirling eddies of air. They are most likely to occur due to wildfires, such as the Loyalton fire, which started as a fire on the California/Nevada border on August 15, 2020. Wildfires produce intense heat over large land expanses, allowing more heat and more room for winds to pick up speeds.

On August 16, 2020, the National Weather Service in Reno issued their first-ever fire tornado or firenado warning, east of Loyalton, California, and west of Cold Springs, Nevada, near Reno. NWS meteorologist Dawn Johnson indicated that she had only seen four documented cases in the previous 20 years. The National Weather Service issued warnings on their Twitter feed, and #Firenado was soon trending.

The National Weather Service (NWS) fire tornado alert was a first in the United States. One of the four U.S. fire tornado sitings happened during the Northern California 2018 Carr fire. The Carr fire tornado spanned a 500 feet wide diameter and reached 35,000 feet high, and wind gusts of 136 MPH - 165 MPH scoring an F3 on the Fujita scale, which measures regular tornado windspeeds.

What is a Fire Tornado?
So what, exactly, is a fire tornado, and how do they happen? For those not scientifically inclined, the short version is that the extreme heat from wildfires, which burn at temperatures of nearly 2,000 degrees Fahrenheit, rises rapidly, carrying moisture. They can reach 300 - 400 feet high, span 20 -50 feet wide, and can last up to an hour, creating an extreme fire twister. When the heat and moisture meet pyrocumulonimbus clouds or thunderclouds, swirling columns of air can form. The hot spinning air can create a tornado, reaching the ground fire and forming a fire tornado.

Unlike a fire whirl, which usually spins at less than 120 MPH, a firenado spins faster, at 100 - 300 MPH wind speeds or much higher. Because their movement is unpredictable, they are incredibly dangerous and challenging for firefighters to battle.

Fire Tornado Fun Facts (averages)
The Carr Fire and had a width of 500 feet and reached 35,000 feet high and lasted over 1 1/2 hours. Here are some fun facts about fire tornados.

Does Homeowners Insurance Cover Fire Tornados?
Despite disasters of a seemingly biblical nature, there is some bright side for worried homeowners. While standard perils may exclude area-specific occurrences, like floods in hurricane-prone areas or hail in other regions, since tornados and wildfires usually don't occur together, you're probably covered for specific fire tornado damage.

However, if you live in a high-risk wildfire or wind area, your policy may not cover you. Check your policy for the following.

Coverage You Need for Fire Tornados
California's Central Valley has long been referred to as the nation's salad bowl. The state itself produces 13% of all produce consumed in the United States. More specifically, 95% of garlic, 99% of artichokes, 75% or our leafy greens, and varying amounts of nuts, particularly walnuts, pistachios, and almonds.

Heatwaves and the conditions that create wildfires and not only threaten our food supply, but forests, wildlife, homes, and lives.

Fire Coverage
As mentioned, most home insurance policies include coverage for fire damage. However, as climate change intensifies, insurance companies are dropping fire coverage, especially in wildfire zones. If you don't have fire coverage, you may get it through your state's FAIR Plan.

Wind Coverage
Wind coverage is typically also included in most home insurance policies. However, in places that need it most, it's probably excluded. Insurance companies have reduced their wind coverage in high-risk areas because it is too costly to include it.

Smoke Damage
Even for those who don't live near traditional wildfire zones, smoke from any wildfire can travel hundreds of miles across multiple states, causing difficult breathing conditions, a danger to the very young, very old, and pets, and can cause significant property damage.

Loss of Use Coverage (Additional Living Expenses)
Some areas, even without an accompanying nearby fire, can be severe enough to cause an evacuation. For those living in Western states, it's best to check your insurance when the weather is mild, and any threat of regional fires is at a minimum.

Whether you live adjacent to a California forest or hundreds of miles away in Arizona, you'll want to know your smoke and fire coverage details. If you must evacuate, evacuation costs, including hotels and pet expenses, can be costly. Check to see if you have Loss of Use (Additional Living Expenses) coverage. And you'll want to have an evacuation plan.

When Do Homeowner Policies Exclude Fire Tornados?
Some fire-prone areas of California require additional wildfire insurance through the California FAIR Plan. Some insurance companies have canceled fire insurance in wildfire zones. So, you must check your policy and talk to your insurance agent before disaster strikes to see if you need any additional coverage for changing climates that contain new threats like fire tornados.

How to Prevent or Minimize a Fire Tornado
Even if California homeowners face some frightening potential disasters, they are not without tools at their command. Homeowners must clear out brush, vegetation, mulch, and other flammable materials from around homes, and structures to 100 feet, to create a space buffer. These measures decrease the chances that a home will be ignited by flying, flaming debris. It also makes it easier to extinguish any flames that do jump to a building.

Some homeowners opt for rooftop sprinklers, and those who live in fire zones should opt for roofing materials with a class-A fire rating, and might even consider replacing roofing preemptively.

Residents should have a fire tornado evacuation plan that includes pets and should research hotels away from fire zones, or have conversations with friends who have homes in other areas and who are willing to play host in an emergency. These are all factors to consider in adjacent fire areas as well.

What Causes Fire Tornados?
If the Golden State seems particularly hard hit by fires and fire tornados, it is, for many reasons.

COVID-19 and Fire Tornados
One of the problems particular to fighting wildfires in 2020 is the center of your Bingo card: COVID-19.

While it might seem unrelated, professional firefighters have had help from trusted state prison inmates in past years.

Now, because of the spread of the virus, those same trusted and non-violent prisoners have, in many cases, been granted early release to avoid overcrowding and allow social distancing among an incarcerated population. The unintended result is that fewer people are available to fight more fires, including fire-induced tornados and rare fire tornados.