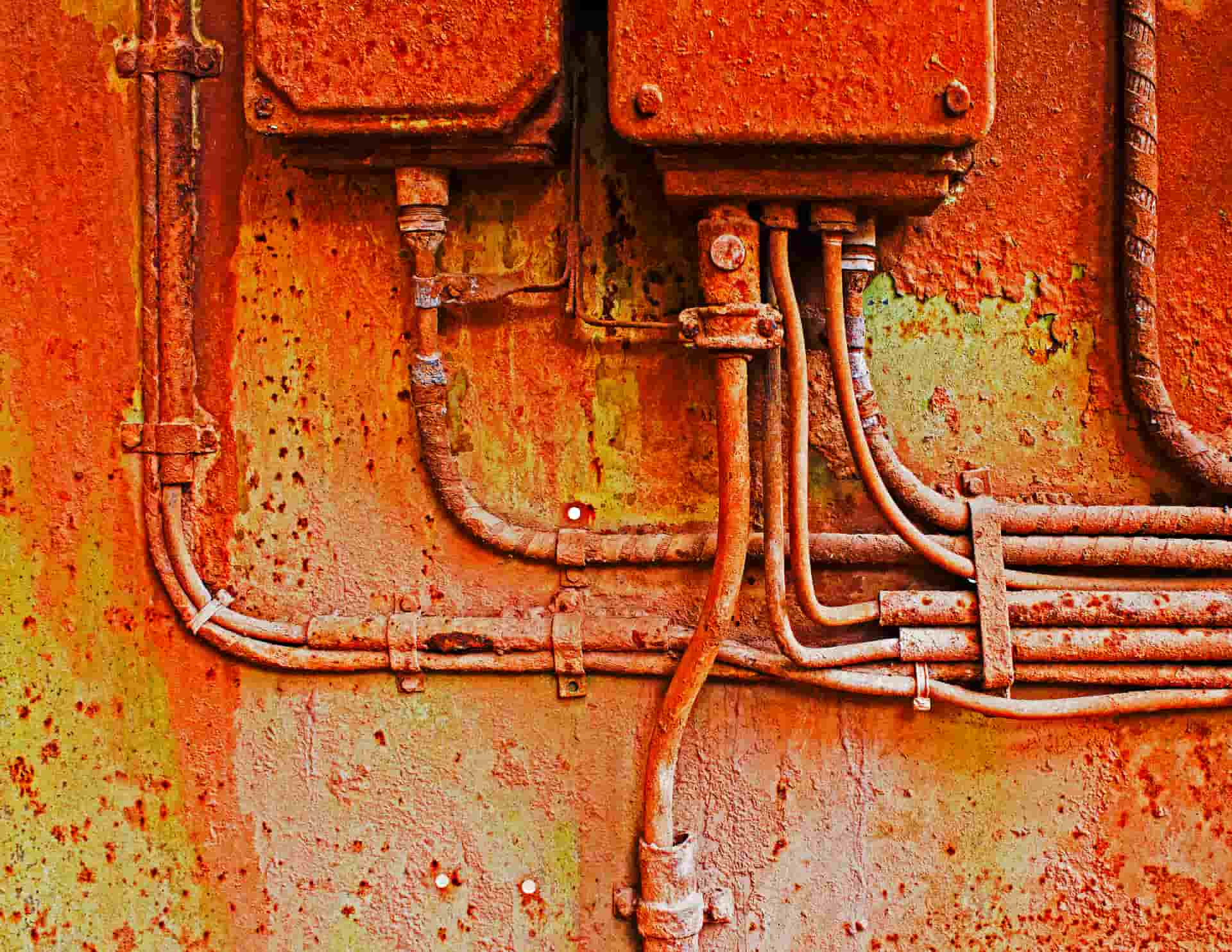 Every year, the United States has around 51,000 home electrical fires. They cause roughly 500 deaths and $1.3 billion in property damage. The Electrical Safety Foundation International says electrical distribution systems (i.e., a home electrical panel) are the third leading cause of these fires.

Unfortunately, many houses still have old panels installed, which can create dangerous conditions. In some cases, specific electrical panel brands may disqualify homeowners from getting insurance coverage. Because these panels are so hazardous, we are going to discuss the different models you should look for and replace.

What are the Dangers of Old Electrical Panels?
To understand the potential danger of older electrical panels, you must know how this system works. You may have limited experience with circuit breakers, perhaps only flipping a few switches when the power goes out. (Electric panels are also called breaker boxes).

However, the panel is both complex and relatively simple. Old electrical panels are dangerous because they do not work correctly, which can cause an electrical surge, sending sparks flying everywhere. But why is that? Here is a quick overview of the essential elements of a circuit breaker.

First, power comes from the primary electrical grid to your house. The amount of energy determines the size of your electrical panel. Most homes use around 200 amps, but larger properties may use more or have multiple breakers.

As electricity comes into the system, it gets diverted to various sections of the home. You will notice a series of switches — each one corresponds to a set of outlets. Each switch has a maximum load capacity (i.e., 15 amps). If the amount of electricity flowing exceeds that limit, the switch turns off, aka breaking the circuit.

When an electrical panel works correctly, the electrical wiring and bus bar internal components will trip and shut off automatically with an overloaded circuit.

Unfortunately, old electrical panels can rust and break down over time, meaning that they will not prevent surges. In some cases, components can melt, like the bus bar or overheating wires. When this happens, the switch cannot turn off no matter what, leading to sparks and potential fires.

Old Electrical Panel Brands
One of the primary issues with home electrical panels is that so many faulty models still exist. Thousands of homes still use these panels, which puts them at a much higher risk of electrical fires. If your house uses one of the following electrical panel brand labels, you should get the unit replaced as soon as possible.

Pushmatic Electrical Panel
Technically speaking, Pushmatic electrical panels are not inherently hazardous. However, since they are not manufactured anymore, they are obsolete and will only get more dangerous as time goes on. These panels were popular for many years, so you can find them in homes built between 1950 and 1980. The company stopped making them in the 80s, so most Pushmatic panels are 40+ years old.

Pushmatic breakers used various names, including ITE Pushmatic and Bulldog Electric. They were safe and effective at the time, but now they are not equipped to handle increased energy demands. Your home probably has more electronic devices and appliances today than the average household in 1980. Also, since no one makes these breakers anymore, parts are not UL certified, and it is almost impossible to find replacement components.

Finally, since the panels are over 40 years old, internal parts may have rusted. That means they will not work correctly and trip the breaker during a surge. That said, Siemens purchased the Pushmatic brand and currently sells newer parts, but they are incompatible with older panels. Instead of trying to "upgrade" an existing breaker, it is better to replace the whole thing.

Your home insurance company likely will not insure an old Pushmatic electrical panel.

Gould Electrical Panel
Gould is one of the brand names for Pushmatic panels. Again, these systems are not inherently dangerous, but they are obsolete and can fail more easily than modern circuit breakers. Over time, a Gould panel will only become more hazardous as it wears down and rusts.

Your home insurance company likely will not insure an old Gould electric panel.

Sylvania Electrical Panel
Sylvania electric panels are labeled as GTE Sylvania panels. These circuit breakers were massively popular until the early 70s when these panels' dangers came to light.

The primary issue with these circuit breakers is that they use aluminum bus bars. As electricity demands increased, the breaker melts to the bus bar, creating a fire hazard. Melted parts could still conduct electricity, but the switch could not shut off, leading to power surges and sparks.

After the fiasco, the company started making Challenger electrical panels. While these models were a slight upgrade, they were still a considerable fire risk. Unlike the other systems, Challenger units had an official recall. The panel recall means that if your home uses this electric panel brand, the company will help pay for a replacement.

Home insurers will not insure older Sylvania electrical panels, but you are in luck since Sylvania will pay to replace them. Your insurer will cover a new one.

CEB Electrical Panel
CEB Electrical Panel was an offshoot of Sylvania sold in Canada. Older CEB panels have the same malfunctioning issues with melted bus bars and hot wires. That could allow surges to flow without tripping the breaker.

Home insurers will not insure these older CEB electrical panels.

Zinsco Electrical Panel
Zinsco is the original name for Sylvania electric panels. GTE-Sylvania bought Zinsco but continued to produce faulty circuit breakers until they had to stop due to dangers.

Unfortunately, many Sylvania Zinsco breakers still exist. The longer they go without getting replaced, the more likely they will fail and cause electrical fires. Zinsco panels likely caused thousands of fires over the years, which is why most insurance companies will not cover a home with a Zinsco or Sylvania panel.

Federal Pacific Electric FPE Panels
FPE Stab Lok circuit breakers were popular in the 80s and 90s, but they utilized a flawed design. The Consumer Products Safety Commission even investigated Federal Pacific panels to see if the danger necessitated a recall. However, the CPSC wound up closing its investigation two years later due to insufficient evidence.

Even without an official recall, FPE electric panels may not work correctly. Some studies suggest that breakers failed to trip up to 25 percent of the time, far worse than modern panels. Otherwise, the breaker seems to work correctly as long there is not a power surge.

Yet, they are not UL certified, and home insurers will not cover Federal Pacific electric panels.

Electrical Panel Types
Although the main circuit breaker is the primary type of electrical system used in the home, there are four unique options. Older homes may utilize a couple of these panels, although they are likely obsolete and need replacing. Here is a rundown of each type of electrical panel:

Getting Insurance with Old Electrical Panels
Since some electrical panel brands come with safety issues, homeowners insurance companies will not cover homes with them installed. For example, if your breaker has a Sylvania label on it, you might get declined. That means an insurer will not sell you any home insurance policy whatsoever until you replace your electrical system.

Another issue is if your home is pre-1960 before the modern National Electric Code NEC took effect, meaning that your house could use knob and tube wiring. This design is much less efficient than current standards, and most insurance companies won't issue a policy.

If you happen to have insurance coverage now and your carrier does not know you have an old electric panel, you may have problems if you file a claim involving your electrical system. We urge you to read your policy to see if there is language about electrical systems or any systems that are building code non-compliant. Or, have a lawyer review it or call your agent to be sure. Your current policy may have fine print, and you might not know about it!

The best move is to schedule a home inspection with a licensed electrician. The home inspector can tell you what kind of electrical panel you have and whether you can repair it or if you must replace it. If the electrician signs off on the panel and says it is safe, that may be good enough for the insurance company.

However, if your home uses one of the models listed above, it is better to get a replacement instead of waiting around for the breaker to fail.

Does Homeowners Insurance Cover Electrical Panel Replacement?
Unfortunately, since outdated electrical panels already exist in the home, homeowners insurance does not pay for a new one.

The only time when you could use insurance to buy a new breaker is if it gets damaged by a named peril (i.e., falling objects or flooding). However, installing a new panel because the old one is a fire risk will have to come out of your pocket.

Get Home Insurance Quotes
Protecting your home is crucial, particularly if you have old or outdated electrical systems. We make it easy to compare rates and pricing side by side. We will even provide risk estimates based on various factors. Click the button below to get started!